On Thanksgiving Day November 23, 2006 I went to PetSmart and bought a hamster, along with the cage, food, chew sticks, toys, and litter. What on earth possessed me to do this?

Well, as a young girl I had pet hamsters. My favorite was Rockie, the most docile of them all lived over five years. I guess I was trying to relive some “good times” from my childhood. 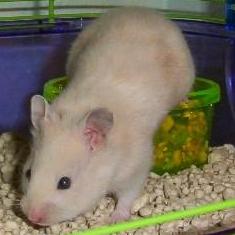 Unfortunately, on October 10, 2008 I found poor old Captain Creamy lifeless in his hamster wheel. I had him for approximately 1 year 10 months. He was a nice little rascal and never bit me not one time.

After successfully escaping three times and I dubbed him Creamy Houdini seriously because one time he was missing in action for 8 days. I even posted notes around the house that said:

Guess what he was found safe after each escape and I have no idea what he was eating or drinking during that time to stay alive. I don’t even wanna know. With 3 cats in the house, that hamster being able to reappear unscathed is beyond me.

I am not trying to be morbid but I took a picture of the dead hamster. If you have a weak stomach don’t look.